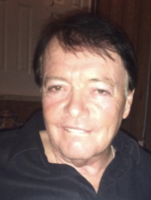 It is with broken hearts that we regret to announce the sudden passing of our father, grandfather, brother and uncle, Francis James Fahey on August 8, 2019 at his home in New Victoria.  Frankie was born in New Waterford on March 7, 1952 and grew up in New Victoria, he was the oldest child of Francis Sr. and Ramona(Tighe) Fahey.

Frankie was an avid member of Local 682 Pipefitter Union and made lifelong friends through his 48 years of dedication as a pipe fitter.

Frankie was a gentle soul who always had a joke to tell and time to spare for a chat. He could often be found taking evening drives in his 1939 Hudson. Frankie also enjoyed playing his guitar and hanging around the garage with his friends.

Frankie will also be missed by his former wife and friend, Jean Fahey. He will also be remembered by his brothers, Wendell(Bertha), Bobby (Andrea) and Darrell; sister, Francine (Earl) and several nieces and nephews and many lifelong friends.

Besides his parents, Francis was predeceased by his brother, Kevin

There will be no visitation. Cremation has taken place under the care and direction of V.J. McGillivray Funeral Home, 380 Smith Street, New Waterford. A funeral mass of celebration will be held on Tuesday, August 13 at 10 a.m. in the Parish of St. Leonard Church, Mount Carmel Avenue, New Waterford with Fr. Ray Huntley officiating. Interment to follow in St. Joseph’s Cemetery, New Victoria.

Yes, they’ll all come to meet me arms a reached smiling sweetly.

Its so good to touch the green, green grass of home.