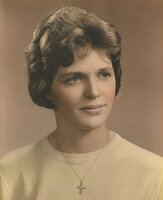 It is with much sadness and sorrow that our family announces the passing of a beautiful lady, Janet Marie (MacDonald) Burke, on Monday October 11, 2021. Janet was born in Glace Bay on February 19, 1942, and was the daughter of the late Dan and Frances (Brophy) MacDonald. Janet was married to James (Jim) Burke for the past 54 years. Janet was an elementary school teacher that started teaching at the early age of 17. She taught in various schools in Glace Bay and New Waterford. Janet was a quiet lady, but very active. She was involved in many things, such as a driver for Meals on Wheels, skating, walking, bowling and geocaching. She was an avid reader, loved sewing and crafting, and going for drives around Cape Breton. Janet enjoyed growing up at her parent’s bungalow in Northside East Bay and later at her own bungalow in Mira, where there were many happy days of swimming, boat rides, bonfires by the river, with much laughter and storytelling. Janet was a very religious person, serving as a reader and eucharistic minister. Janet is survived by her husband, Jim, sons, James “Jim Jr” (Mary Ann) and John (Janis), five grandchildren, four granddaughters, Abigail, Effie, Mary Kate and Lila and one grandson, Lucas; brothers, Michael “Buddy” (Charlene), Donnie (Delores), Darryl (late Darlene); brothers-in-law, Johnny (Sharlene) and Gary “Bim” Burke; sisters-in-law, Georgie (Calder) MacDonald, Andrea Nandlal, Josephine “Beanie” Burke, Debbie Burke as well as, many nieces and nephews and a special friend, Carrie Morrison. Janet had many family members who predeceased her, including her parents, parents-in-law, John and Mable Burke, infant brother, Ronnie, sisters-in-law, Darlene, Mary and Theresa; brothers-in-law, Daniel “Dodie”, Willie and Donnie and nephew, Geoffrey. Cremation has taken place and the funeral mass will be celebrated on Saturday, Oct 16th, 2021 at 10 am in Holy Cross Church, Glace Bay with Fr Norman MacPhee officiating. As per Janet’s request, there will be no visitation and burial will take place at a later date. In lieu of flowers, donations can be made to Holy Cross Church or a charity of your choice. A special thank you to the Doctors and Nurses at the Glace Bay Hospital South, New Waterford Heights and the CB Regional Hospital Stroke and Palliative Care Units. Funeral arrangements are under the direction of V.J. McGillivray Funeral Home and Cremation Centre, Glace Bay. Online condolences to the family can be expressed at www.vjmcgillivray.ca Covid protocol of masks and proof of vaccination are required.