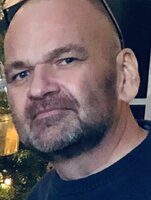 It is with heartfelt sorrow that we announce the passing of our brother, uncle, hero, warrior and friend. Jack, age 54, passed away very peacefully on Friday, April 29, 2022 with his loving family at his side following a brief but valiant fight with cancer. Jack was born Jan. 15, 1968 and was the eldest child of the late Paddy and Sheila (McLeod) Ryan of Reserve Mines. Jack was a graduate of R.D.H.S Class of ’86. At the age of 15, he started a part time job in the hardware dept. with Canadian Tire Store, Sydney. At that time, little did he know that this would be the beginning of a 37-year career with Canadian Tire. Jack had a keen knowledge of retail and customer service that provided him the opportunity to expand with his career. He has managed numerous stores in many parts of Nova Scotia but found his true calling as a Regional Project Manager with Canadian Tire Corporation for over 15 yrs. He travelled throughout Canada to lead in the development and remodeling in building of new stores. He was a remarkable achiever and a valued employee sought out by the Corporation due to his incredible work ethic and respect. Jack would often smirk when describing his job title role to people, “If you went to take something from a shelf that is no longer there- chances are – I DID THAT!” When he wasn’t managing development of Canadian Tire Stores, he spent his leisure time exploring new places. He particularly loved Newfoundland and of course, his home, Cape Breton. He would take an impromptu road trip to explore some random off the grid path just to say he found it, check out an abandoned community or hit the highway on his Harley. He chased sunsets, appreciated beautiful scenery, beaches, fishing, loved classic cars (especially old Camaros), looked to find a good real estate deal or search the web for some piece of heaven that caught his interest. This huge loss of our beloved Jack will be irreplaceable. He will be so missed by his brother, Brian, Reserve Mines; his sister, Jenny (David Shaw); Tanglewood. He was, “THE Uncle Extraordinaire” to Brian’s children, Jayden Bouchie and Brieley Ryan and Jenny’s children, Sean and Christian Murphy. He loved them all as if they were his own and was so proud of the amazing young adults they have become. They would wake up to homemade breakfasts or be offered, without hesitation, anything that he could provide to them. He was kind, gentle, generous and had a huge heart. We would be amiss to remind everyone how much of a big teddy bear he was. He has helped out so many people in times of need and would be on the way to be of any assistance even before you had to tell him you needed it and never ask for anything in return. Above all, he knew the value of family, especially during the past eight months. Jack is also survived by his maternal uncle, Kevin (Margaret) McLeod, Birch Grove; maternal aunt, Peggy Nauffts, Collingwood, Ontario, additionally, paternal uncles, Bernie Ryan, Larry (Kay) Ryan, Glace Bay and paternal aunt, Mary (Ryan) MacIntyre, Burlington, Ont. Jack will be missed dearly by numerous cousins and extended family members and friends and co-workers from coast to coast. Besides his parents, he was predeceased by infant twin brother and sister, Patrick and Patricia (1972), his paternal grandparents, Jack T. and Elizabeth (Hines) Ryan and maternal grandparents, Joe and Janette (Rennie) McLeod. Sincere gratitude is extended to his health care team and friends he made along the way during this short journey with his illness. Thank you to, Dr. Hall, Dr. McGory, Dr. Zwicker, Dr. Khodadad, Dr. Azer, Dr. Burns, Dr. Greeff and Dr. A. F D’Intino,. Also, to the beautiful nurses in the Cancer Center and Palliative Care who gave him hope and comfort when he needed it most. Please know that Jack put faith in all you have done for him. He also had some very special friends who checked in on a daily basis to give him encouragement, hope, laughter and send some love via text, phone call, or a visit. May God bless you all. Visitation for the Late Jack Ryan will be held in V.J. McGillivray Funeral Home & Cremation Centre, 16 Reserve Street, Glace Bay on Thursday, May 5th, 2022 from 2-4 pm and 7-9 pm. A celebration of his life will be held in the Funeral Home Chapel on Friday May 6th, 2022 at 11:00 am. followed by interment in St. Joseph’s Cemetery, Reserve Mines. Fr. Duaine Devereaux presiding. This event will also be live streamed at https://youtu.be/qLHMNvIZaEQ for those who may not be able to attend. We kindly ask, if considering a donation to a charity, please consider the Patient Care Fund at the CBRH in Jack’s name. We also wish that you think of him with fond memories, raise a cold pint in his honor and play his favorite tune, Dark Island by Ryan’s Fancy. On line condolences to the family can be expressed at: www.vjmcgillivray.ca “A golden heart stopped beating, hardworking hands at rest. God broke our hearts to prove to us that he only takes the best”. We will love you and will miss you so much.