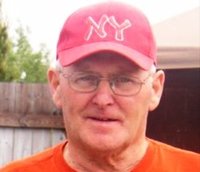 It was with heavy hearts that we announce the sudden passing of our dad, Henry Bradbury, on Sunday, April 10th, 2016, at the Cape Breton Regional Hospital surrounded by his loving family. He was 75 years old. Born in Glace Bay he was the son of the late Henry and Margareta (Winstanley) Bradbury. Henry was a true outdoorsman who loved to hunt and fish. He shared this love with his boys and his grandchildren. Henry travelled all over Nova Scotia to hockey rinks and baseball fields to cheer on his grandkids. He had a heart of gold and left a lasting memory on everyone he met. He is survived by his three sons, Darrel (April), Timmy (Kelly), Jim (Charlene); sisters, Alice Rasmussen, Beatrice Curtis, Carol (Bruce) MacLeod, Lois (Carman) Noiles, Eileen (George) Simmons; brother, Robert (Kathy), his six loving grandchildren, Jenna, Jacqueline, Jeff, Anthony, Ryan, Emma and two great-grandchildren, Lochlan and Harlan. Besides his parents, he was also predeceased by his brother, Lawrence. There will be no visitation. Cremation has taken place under the care and direction of V.J. McGillivary Funeral Home,16 Reserve Street, Glace Bay. A funeral service officitated by Rev. Vernon Reid will be celebrated Wednesday, April 13th at 2:00pm, in the V.J. McGillivray Funeral Home Chapel. In lieu of flowers, memorial donations in his memory may be made to the Heart and Stroke Foundation of Cape Breton. Online Condolences to the Bradbury family can be expressed at: www.vjmcgillivray.ca " Rest in the peace you so richly deserve Da! "