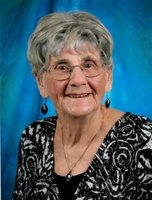 Hughena Roach, 96, of New Waterford, passed away peacefully at home on Wednesday, April 13, 2016. Born in New Waterford, she was a daughter of the late John 'Jack' and Margaret (MacDougall) Higgins. Hughena enjoyed playing darts, camping at Ben Eoin campground and dancing. She was a long-time participant in the Joy Program at Mt. Carmel School and a proud member of the New Waterford Pensioners' Club. Hughena is survived by her son, Russell (Sharon); daughters Patricia (John) Campbell and Barbara Roach (Bernie MacDonald), all of New Waterford, Eileen (Geoff) Jarrett, Bracebridge, Ont., Linda (Reg Baker), Huntsville, Ont.; sister Lilly Wootton, London, Ont.; She was affectionately known as "Mere" to her 11 grandchildren, 21 great-grandchildren and a great many nieces and nephews. She was predeceased by her husband, Hubert, in 1983; six sisters Gertie, Mary, Marie, Viola, Agnes and Beatrice; one brother, Billy and special brother, little Bill. Visitation will be held on Sunday, April 17, 2016, from 2-4 and 7-9 p.m. in V.J. McGillivray Funeral Home, 380 Smith Street, New Waterford. A funeral mass of celebration will take place Monday, April 18, at 10 a.m. in the Parish Church of St. Leonard, Mount Carmel Avenue, with Father Ray Huntley officiating. Burial will be in Mt. Carmel cemetery with a luncheon to follow at the Knights of Columbus Hall, Plummer Avenue, New Waterford. Family flowers only. In lieu of flowers, donations in her memory may be made to a charity of one's choice. Online expressions of sympathy may be sent to the family at: www.vjmcgillivray.ca.