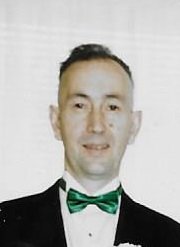 It is with profound sadness that we announce the passing of Gerald Carocci, age 71, on Tuesday, April 16th, 2019 at the CBRH, Sydney surrounded by his loving family.

Born in Cheticamp and raised in Whitney Pier, he was the son of the late Louis “Libby” and Lucy (Ivy) Carocci. Gerald was the grandson of Angelo and Philomena Carocci and Mary and Gonzaqui Ivy.

Despite ill health from a young age, Gerald defied the odds and lived to the age of 71. Having worked in the Steel Plant he was forced to retire at a young age due to health reasons. However Gerald relished his new role of stay at home dad. His greatest joy was providing care for his children, Tracey and Gerald Jr. only to be surpassed by the pride and pleasure he felt in his later role as Grampy to Emily “Grampys little girl” and Robert “His little buddy”.

Gerald enjoyed the simple pleasures of life; such as watching his favourite team, the Blue Jays, picking blue berries on Steele’s Hill, enjoying a feed of lobster and reminiscing about years gone by. He could always be spotted on the dance floor, anyone would be considered lucky to have the pleasure of joining him for a polka or jiving to the oldies. Singing diddies while bouncing children on his knee gave him great pleasure as well as visits from his siblings. He loved to spend time with his wife of 48 years whom he affectionately referred to as Nellie. Gerald loved to laugh and took great delight in making others laugh with his little jokes. He also had an amazing knack for remembering dates. You could always count on him to remember your birthday or other significant dates.

Besides his parents, Gerald was predeceased by his sister, Valerie Pittman and brothers, John, Edward, Louis Carocci and his sister in law, Alice MacKenzie.

We the Carocci family extend our sincere appreciation to the staff of Victoria Haven Nursing Home who provided the upmost care and attention the past four years. We would also like to express our gratitude to the staff and doctors (Dr. Sampson and Dr. Kelly) of the An Cala Palliative Care Unit for allowing him to pass with grace and dignity.

Cremation has taken place. Visitation is Easter Sunday evening from 6 P.M. to 9 P.M. in V.J. McGillivray Funeral Home, Chapel and Reception Centre, 16 Reserve Street, Glace Bay. The funeral mass officiated by Fr. Norman MacPhee is Monday at 11 a.m. in Holy Cross Church followed by a reception in the church hall.

Family flowers only, donations may be made to the Alzheimer’s Association or Victoria Haven Nursing Home. On line condolences to the family can be expressed at: www.vjmcgillivray.ca

Gerald was a loving and caring man, a friend to all and beloved by many. “We love you Da”.