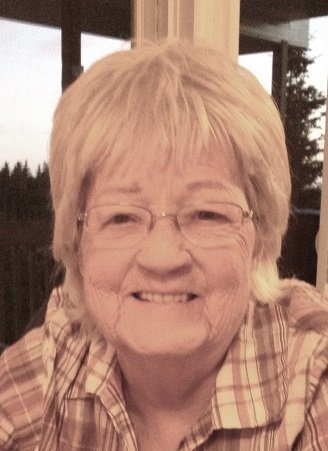 Josephine (Gallant) Ellsworth, formerly of Westmount, passed away peacefully at the age of 87 at Harbourstone Enhanced Care in Sydney River on June 16th, 2019.

Josie was born on June 2, 1932 in Glace Bay to the late John and Jessie (MacLean) Gallant.

Josie grew up in a large, loving family in Reserve Mines.  In 1960 she eloped to Ontario with Ronald (Rannie) Ellsworth.  They were wed on September 3rd that same year in Toronto.  Tired of living away and missing home, they returned to Cape Breton in 1968 and purchased their home on Fulton Avenue in Westmount where they started their family the following year.

Josie worked as a housekeeper at the tuberculosis sanitarium in Point Edward until the girls came along.  There after she transitioned to her most loved role as a mother and homemaker and later Nannie to Avery.   Josie loved volunteering for PTA events especially working in the school library at Robin Foote Elementary.   She had a love for nature and animals, especially the family cats.

Josie is survived by her daughter, Andrea (Rick) Martelle, grandson, Avery Mills of Winslow, Maine and her daughter, Renee Ellsworth of Calgary Alberta.

Josie and Rannie were blessed to have loving neighbours in Westmount, Murray and Kim Lewis became their “bonus” children. Her extended family and friends will also miss Josie.

The family extends their gratitude to the staff at St Anne’s Bay @ Harbourstone for their loving and attentive care, especially over the last 2 months.  It was here Josie made one of her dearest friends.  Now she and Gladys are reunited and we can only imagine the laughs they are having.   Through the love and support of Kim, Murray, Tanya and Lenore with phone calls and video chats, Andrea and Renee knew their mom was well loved and cared for across the miles that separated them.

At Josie’s request, a prayer service will be held graveside on Tuesday, June 25th at St. Eugene’s Cemetery in Dominion at 11 AM with the Rev. Daniel Boudreau officiating.

In lieu of flowers, as an expression of sympathy, memorial donations may be made to the Nova Scotia Alzheimer’s Society. On line condolences to the family can be expressed at: www.vjmcgillivray.ca