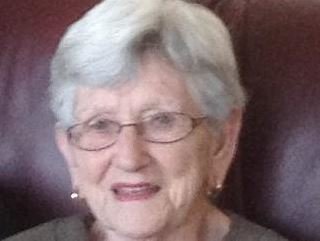 It is with deep sadness, we the family, announce the passing of Thelma (Donahue) Howley at Taigh Na Mara, Glace Bay on Sunday, November 24, 2019. The daughter of the late Michael and Veronica (Johnson) Donahue, she was the last surviving member of her immediate family.

She was predeceased by her husband Dan and son Danny, as well as her sister Edith Jackson and brothers John, Mickey, Gordon, Leo, Francis, Harold and Edgar.

Thelma lived a long, wonderful life. She taught business courses at Gowrie School in Port Morien and retired as a librarian assistant from the Cape Breton Regional Library in Glace Bay.  She actively participated in several church groups and social clubs. Thelma enjoyed sewing, knitting and crocheting beautiful hats, mitts, socks, baby bonnets and other gifts for the Salvation Army.

The family would like to extend a heartfelt thank you to the exceptional care provided by Dr. Trevor Guy, the staff at Taigh Na Mara, her home care workers, the palliative care team and the Victorian Order of Nurses.

There will be no visitation. Cremation has taken place under the direction of V.J. McGillivray Funeral Home, Chapel & Reception Centre, 16 Reserve Street, Glace Bay. The funeral mass will be celebrated on Friday, November 29th at 10 am in St. Anne’s Church, Glace Bay followed by a reception in the foyer. Interment in Forest Haven Memorial Gardens. Fr. Duaine Devereaux officiating.

In lieu of flowers, donations may be made in Thelma’s name to palliative care, the War Amps of Canada or a charity of one’s choice.