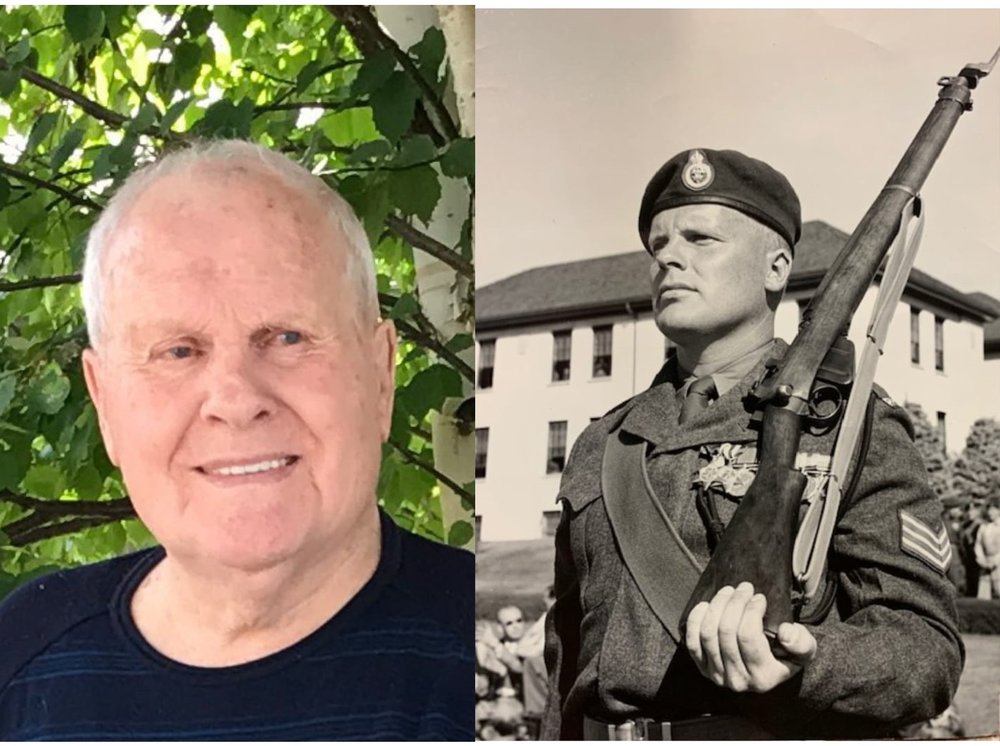 Please share a memory of Hartley to include in a keepsake book for family and friends.
View Tribute Book

Hartley Slade passed away peacefully on February 8th, 2020 in Ontario with his family by his side at the age of 97 following a stroke.

At 17, while sitting on the front porch wondering what to do with his life, a couple of older boys passed by on their way to enlist and he decided to join them, so he lied about his age and was shipped out to fight in WWII. After four years’ deployment in England, he participated in the battle of Normandy and was involved in the liberation of Bergen-Belsen concentration camp.

After the war, Dad returned to Cape Breton where he worked for a year and a half in the coal mines. He joked that he had a greater chance of getting killed in the mine than the army, so he re-enlisted and spent 25 years as a proud member of the Princess Patricia’s Canadian Light Infantry, where he achieved the rank of Warrant Officer and would also see active duty in the Korean War. It was a decision that would set the course for the rest of his life, bringing him and his family too many wonderful places in Canada and Europe. Despite witnessing the horrors of both wars, Dad always believed in the goodness of mankind.

Dad grew up on Newton Street, “the biggest little street” in Glace Bay, Nova Scotia. He was orphaned at the age of six and he and his late brother Harold (Duggie) were raised by loving grandparents. It was always his greatest wish to have a family of his own and his five children were an important part of his life, just as he was an integral part of our lives.

Dad was a fine athlete, especially baseball, and his love of sports resulted in many wrestling matches on the living room floor and plenty of outdoor activities. Even the neighborhood kids could count on Dad to organize a ball game or make an ice rink in the backyard for hockey. Dad was just one of the kids. Mom often commented that she raised five kids and one husband.

Dad was probably at his finest, though, dispensing fatherly advice and words of wisdom with a quick acerbic wit, expressions we often repeat and laugh about to this day. We feel truly blessed to have had such a wonderful man as our father, always loved, never to be forgotten.

Heartfelt thanks to the wonderful staff at Elgin Lodge in Port Elgin, Ontario, where Dad lived for the last seven years and to the tremendous staff at Owen Sound Hospital for their compassion and care.

A special thank you is due to Roy and Cathy Mugford, Dad’s longtime friends and neighbors in Glace Bay.

Cremation has already taken place as per Dad’s wishes.

VISITATION WILL BE HELD ON SATURDAY, AUGUST 13, 2022 FROM 10 AM UNTIL THE TIME OF THE SERVICE AT 11 AM FOLLOWED BY A RECEPTION , ALL IN V.J. MCGILLIVRAY FUNERAL HOME & CREMATION CENTRE, 16 RESERVE STREET, GLACE BAY. FR. DAN BOUDREAU WILL OFFICIATE. INTERMENT IN ST. JOSEPH'S CEMETERY, RESERVE MINES.

Memorial donations to the St. Joseph’s Cemetery or the Glace Bay Food Bank would be appreciated by the family.