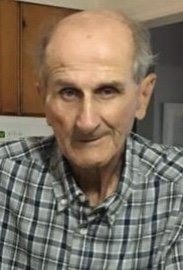 With fond memories and loving hearts we announce the peaceful passing of Patty Cook on April 27, 2019 at the Cape Breton Regional Hospital Palliative Care Unit.

Born on February 1, 1947, Patty was the son of the late Peter and Bessie (Dickson) Cook.

A lifetime resident of Wood Avenue, New Waterford, Patty was considered a staple of this neighbourhood. Patty would often stroll over to a neighbour's house to chat or tease someone and, of course, lend a helping hand. He loved standing around a bonfire and telling everyone the news of the day. Patty's love for children and animals was obvious to all who knew him.

Patty will be greatly missed by his friends 'downtown' and his bingo and card buddies. Patty also loved a good old country song.

In earlier years, Patty worked at various grocery stores where he made many friends. Patty would often be seen walking the streets of town and yes, even from Sydney.

Patty is survived by three sisters, Catherine Landry, Betty Anne (Murray Kirkpatrick), and Ruth Gaudet; two brothers, Peter (Aleta) and Bernie. Patty is also survived by many nieces, nephews, grandnieces and grandnephews, especially one grandniece, Jorja, whom he often referred to as 'my pet'. Also surviving Patty is his lifetime friend and neighbour, Terry Quigley, who he lived with for a number of years until his passing.

Cremation has taken place. There will be no visitation. A funeral service will be held in V.J. McGillivray Funeral Home Chapel, 380 Smith Street, New Waterford on Friday, May 3, 2019 at 11 a.m with Father Ray Huntley officiating. Burial will be in Mount Carmel Cemetery with a  luncheon to follow at Terry Quigley's home. In lieu of flowers, donations may be made to a charity of one's choice. Online expressions of sympathy may be sent to the family at: www.vjmcgillivray.ca.