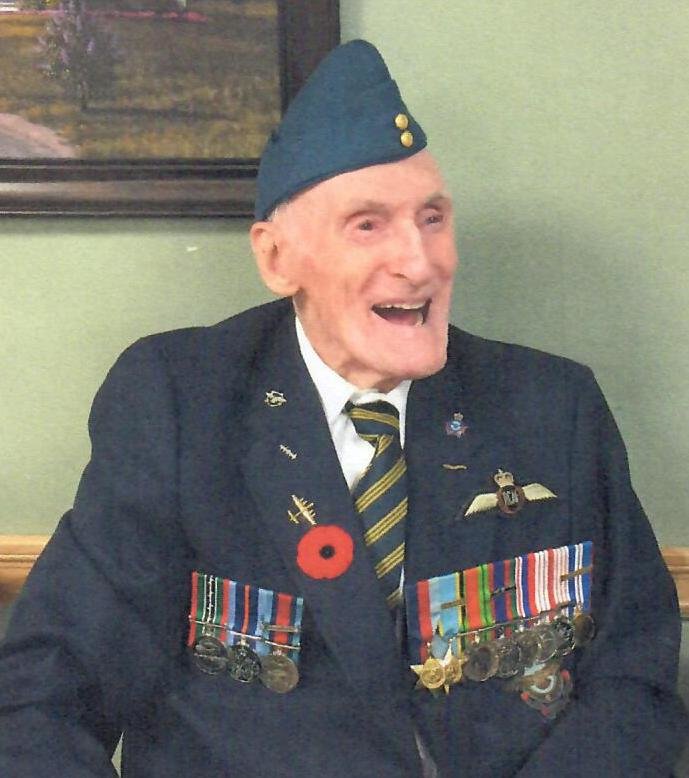 Mike Laffin of New Waterford died May 23, 2019 in the Cape Breton Regional Hospital after a brief illness.

Born in New Waterford on January 12, 1918, Mike attended Mount Carmel and Central Schools and was a member of St. Leonard Parish (formerly Mount Carmel).  Mike left school at 16 to work at # 12 and 18 collieries.  In 1941 he enlisted in the Royal Canadian Air Force, training as a pilot.  On June 17, 1944, after 22 missions, his plane was shot down over the Netherlands.  Mike was captured and sent to a prisoner of war camp.  In January of 1945, the allied prisoners were ordered to leave the camp and in one of the harshest winters ever, began what became known as the Long March, walking 250 km from eastern Poland to Berlin.  It was during this time that Mike vowed that if he survived, he would live a life of service.  He made good on his promise.  After the war, he attended St.F.X. and graduated from McGill University’s School of Dentistry.  He returned home to New Waterford and for many years served as the town’s only dentist.

He joined the Knights of Columbus and the Rotary Club, becoming a Paul Harris fellow.  He was a lifetime member of the Royal Canadian Legion, Branch 15 and the Army, Navy, Air Force Veterans Unit 217.  As a community leader, Mike was encouraged to run for politics.  He was first elected to the Nova Scotia Legislature in 1963, serving as the first Progressive Conservative MLA for Cape Breton Centre. He won four more elections and was honoured to serve as Deputy Speaker of the Legislature, Minister of Housing and Minister of Government Services. With a flair for languages, Mike delivered speeches in French, German and Yiddish.  He was a gifted story-teller, always entertaining and occasionally irreverent.

Mike dedicated his life to serving others, primarily his Cape Breton Centre constituents, his province and his country.  While he successfully secured seniors’ housing, hospitals, schools, rinks and infrastructure for Cape Breton, he was especially proud to help students find summer jobs so they could continue their education.

Always a competitor, Mike raced his own horses, played tennis, basketball, baseball and hockey and occasionally found himself in a boxing match.  He hung up his skates at the age of 84 and reluctantly put away his golf clubs in his early 90’s.  He continued to enjoy bridge games for several more years.  He was among the first inductees into the New Waterford Sports Hall of Fame.

He received many honours and awards over the years for his war service, his dedication to his community and his athletic pursuits.  In 2015 he was awarded the Legion of Honour, France’s highest distinction for his D-Day role in France’s liberation.  Mike delivered countless speeches at Remembrance Day ceremonies, urging us to never forget those who paid the ultimate sacrifice.  His memories of the war and the loss of his fallen comrades never left him.

Mike was larger than life; he never meant to be, he simply was.  He was never afraid to step out of the crowd and stand up for those who couldn’t be seen.  He challenged authority and he never backed down from a fight.  He was tough to the core and he brought all that strength and mental agility to every fight that was fought on someone else’s behalf.  And more often than not, he won.  We salute his courage, we will forever be tickled by his irrepressible sense of humour and inspired by his incredible zest for life.  Mike’s humility would have him strike out all of the above. Just the facts he said.  But for once, he’s not in charge.

He is survived by his daughters Maureen (Aubrey O’Brien) and Linda (George McLellan), and grandchildren Christopher and Aynsley McLellan.

He was predeceased by his loving wife of 68 years, Doris (MacKinnon) in 2016, his parents, Michael J. and Margaret (MacDougall) Laffin; sister Mary Hornby;  brothers, Fr. Richard, Donald, Douglas and John.

Visitation will be held Monday, May 27, from 2-4 pm and 7-9 pm at V.J. McGillivray Funeral Home, 380 Smith Street, New Waterford. Knight of Columbus members will assemble at the funeral home for prayers at 7pm Monday evening. The Funeral Mass will be held Tuesday, May 28, 10 am at the Parish of St. Leonard, Mount Carmel Avenue, New Waterford.  Interment in the parish cemetery (Mt. Carmel). Reception to follow at the KOC, Plummer Avenue.

Get Directions
Monday
27
May

Get Directions
Tuesday
28
May