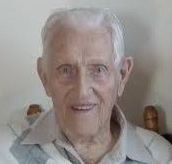 At the age of 15 Roy began a full-time career as a Baker at Phalen’s Bakery. He remained there until 1942 when called to duty as a member of the Royal Canadian Artillery. When he returned home in 1946 he resumed his role at Phalen’s. In 1966 Roy began a new career as Manager of the Glace Bay Chicken Chalet, where he remained until his retirement in 1984.

Roy was a long-time member of St. Anne’s Men’s Club and contributed to all aspects of Parish life. Roy with his wife Rose was an active community volunteer. They enjoyed a 31 years association with Boy Scouts Canada, serving both as Leaders and Trainers. Their involvement in the Old Town Hall Museum was very special to them. In 2002, they received the Queen's Jubilee Medal for a lifetime of community service and volunteer activities.

And to those kind and supportive members of New Waterford Homecare Service, the VON and Palliative Care staff who cared for Dad and made it possible for him to remain at home, we offer you a profound thank you. Each and every one of you made a difference in his life.
“Don't cry because it's over, smile because it happened.” Dr. Seuss

Visitation will be held on Thursday from 4 p.m. to 8 p.m. in V.J McGillivray Funeral Home, 16 Reserve Street, Glace Bay.The funeral mass officiated by Fr. Anthony O’Connor is Friday at 11 a.m. in St. Anne’s Church followed by a reception in the church foyer. Interment to follow in the parish cemetery.

Family flowers only. In lieu of flowers please consider making a memorial donation to the Glace Bay Heritage Museum. On line condolences to the family can be expressed at: www.vjmcgillivray.ca